Who will win at the French Open? 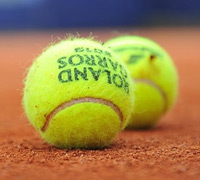 2022 French Open The aces will be serving it up again in Paris from Sunday. The 2022 French Open is on the agenda. And excitement is guaranteed at the second Grand Slam tournament of the year. Will Rafael Nadal take the next title on his preferred surface? And who will triumph for the women? We have all the info and betting recommendations for you!

Quick Facts about the tournament:

It will be unclear how many spectators will be allowed at the famous court in Paris until shortly before the start of the tournament. One thing is certain: After two years of heavy restrictions, there will definitely be more fans close to the action at the 2022 French Open when the best tennis aces duel. Currently a little more than 5,000 spectators per day are expected until June 9th. After that it should be more than 13,000. A prerequisite for admission is proof that one does not have Covid-19. This is achieved via a negative PCR test, completed vaccination or recovery from an infection.

There was a question mark regarding the Serb’s participation for a long time. Despite his lack of vaccination, the former world number 1 can proceed with his title defence. The reason for this is the extensive easing of restrictions in France. Shortly before the Grand Slam he presented himself in good form in Rome, where he won his 87th ATP title. In Paris, record holder Rafael Nadal is always a hot candidate for victory. He has also shown himself in good condition recently, until his foot injury halted him again. There is therefore a question mark regarding his fitness. Besides the other top players Tsitsipas and Zverev, newcomer Carlos Alcaraz has to be taken into account. The young Spaniard overcame his idol in Madrid and also defeated Djokovic there. Nevertheless, it is a different challenge to play in a Grand Slam over two weeks and in three winning sets. There is still a question mark regarding Daniil Medvedev after his injury.

Who will triumph for the women?

Unlike with the men, time and again there have been surprises with the ladies in the past. The field is extremely well balanced. For our bookies, the current number 1 Iga Swiatek is the big favourite for the title. And deservedly so: The Pole won in Rome and also has experience in Paris – in 2020 she was the big winner. Last year’s winner Barbora Krejčíková has been battling an elbow injury since Doha. Due to injury, Naomi Osaka will most likely be absent, as will be Ashleigh Barty who ended her career. Is the way clear for a newcomer?

All bets at a glance!