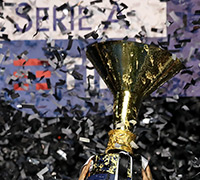 Serie A The ball is now also rolling again in the country of the European Champions. Being the last of the top leagues, the Serie A kicks off the 2021/22 season on the weekend. We provide you with all facts for the new season, the most important dates as well as betting recommendations for your next football tips!

Quick facts for the season:

Manager changes are in

Twelve of the 20 teams are trusting in a new coach. Among them also top teams Inter Milan, Juve and AS Roma. Long-term Lazio coach Simone Inzaghi replaces coach of success Antonio Conte at the reigning champions. Record holders Juve are separating from club-legend Andrea Pirlo and are bringing back Massimiliano Allegri. The latter led them to five championship titles and four Coppa Italia victories between 2014 and 2019 and is expected to take them back to the top. The most famous face, however, will be on the bench of AS Roma: “The Special One” José Mourinho is returning to Italy after a 11-year absence.

Will Juve strike back?

After nine consecutive titles, Juve only just managed to secure a Champions League spot last season. Club legend Andrea Pirlo clearly failed as manager. Now coach of success Allegri is supposed to bring the Old Lady back on track. The tight financial situation did not allow for big new acquisitions and it is still undecided If goal-getter Ronaldo will stay. After two years, keeper Buffon left the team again. However, our bookies still expect Juve to be title contestants again. Inter Milan are starting the mission to defend the title without coach of success Antonio Conte. Moreover, two key players were given up: Lukaku went back to Chelsea and midfielder Hakimi left the Nerazurri for PSG. It will be a difficult year and the title seems to be out of reach.

In Rome, expectations set in José Mourinho are high. “The Special One” is expected to bring the Giallorossi back on track. Last season, they only finished 7th. During the preparation, the Portuguese changed everything. He wants to turn the team inside out and his transfer wish list is still long. I expect a better final rank than last season. However, the Romans won’t be joining the fight for the title.

All Serie A bets!!
Play responsibly!