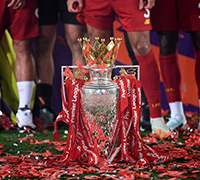 Premier League It’s High-Noon again in Europe’s stadiums: The ball is now rolling again also in the mother country of football. We provide important info about the 2021/22 season of the Premier League. Which team has the best chances to win the coveted trophy? We’ve also got betting recommendations for our players!

The video assisted referee caused plenty of controversial decisions at the EURO and also during the previous season of the Premier League. That’s why now there are thicker control lines when reviewing offside decisions. This is supposed to give the advantage to the attacking team and toes should not longer have the power to decide if a goal counts or not. Further, similar to at the EURO, the flow of the match should not be interrupted as often anymore due to a VAR review. These interruptions caused a lot of resentment among teams and fans.

In contrast to e.g. the Bundesliga, the Premier League returns to the usual three substitutions per match. Exceptions in case of concussions remain.

It was a thrilling wait for the match schedule of the 2021/22 season of the Premier League. High-profile duels and derbies are always on the schedule in England. Fans can already look forward to top-class football at the start.

The winter break in February, which was introduced in the 2019/20 season, is also meant to be kept in the coming season. Last season, the tight match schedule did not allow a break. However, fans won’t have to live without football during this time: the break only means a reduced schedule on two weekends. That way, the teams have a staggered match-free time.

Will the title end up in Manchester again?

The Citizens are our bookies’ favourites also for the 2021/22 season. Last year, Pep Guardiola’s youngsters enthralled fans and experts. Assuming that key players like De Bruyne, Torres or Starling will have developed further, it will be hard to take the title out of their hands. Furthermore, Jack Greallish will strengthen the midfield. The national team player is the most expensive transfer of the Premier League. After a season with ups and downs, we also expect Liverpool to come back strong. Virgil Van Dyk and Joe Gomez are back after injuries and with Ibrahima Konaté the defensive gets a boost. A lot will be possible if Klopp’s eleven is spared from injuries this time.

One also will definitely have to keep an eye on Chelsea. Under Thomas Tuchel, the Blues gained momentum and won the Champions League. Now also the league title should come back to Stamford Bridge. The defensive is more stable and the midfield is staffed with top players. With Romelu Lukaku, a renowned reinforcement for the offensive was announced shortly before the start of the season. He is meant to provide the goals after the departure of Olivier Giroud.

And then there are still Manchester United. The fans of the Red Devils agree: eight years are long enough: the title is a must. Solskjaer’s eleven was among the top teams in the previous season and only had to look up to their city rivals City at the end. The already well-staffed offensive was strengthened once more with Jaden Sancho. The defensive, however, is a bit of a weak point. With Harry Maguire and Raphael Varane only two top centre-backs are in the squad.

Who is in top shape already?

Title holders Manchester City are opening the 2021/22 season with a clash. They are visiting the Spurs. Guardiola’s team, who entered the stadium without their top stars, missed out on the first trophy at the Community Shield. The coach doesn’t see his team in top shape yet at the start of the season. The departure of top striker Harry Kane is still a hot topic in North London. Otherwise, they didn’t make many headlines on the transfer market. That’s not the only reason why the Sky Blues are rated higher at the start. Therefore, victory no. 1 on Matchday 1 should be a sure thing. Their direct opponents in the title race should also start with three points. Chelsea have already completed a successful dress rehearsal at the Supercup. With Leeds, Man Utd are welcoming an opponent that one should beat as a title contender.