Playoff for the last tickets! 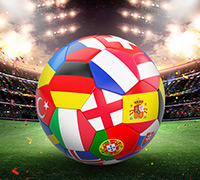 Playoff for the last tickets! Ten of the 13 European World Cup participants have already been determined. The last tickets will now be awarded in the playoffs. Contenders are, amongst others, former World and European champions like Italy and Portugal. Also Austria are still fighting for qualification for Qatar. We’ve got the info about the playoffs for you.

How does the playoff work?

A new mode is now used to aware the last three tickets for Qatar. Aside from the ten teams who finished second in their groups in the World Cup Qualifiers, also the two top group winners of the Nations League, who didn’t already qualify via the regular qualification, have a chance. There are three pools with semi-finals and a final each. 2nd leg matches are not scheduled. Originally, all World Cup participants should have been determined by March 29. The draw for the groups is scheduled for April 1. However, the war in Ukraine has led to changes in the schedule.

The second semi-final between Scotland and Ukraine was at first moved to June. Therefore, also the final of pool A cannot be played as scheduled. Thus, Austria’s possible participation in the World Cup will only be determined at the end of June. Due to current developments, it remains unsure if this schedule will hold.

Poland and also the other teams in pool B – and therefore potential opponents for the final – have announced that they will boycott the matches against Russia due to the Ukraine war. Therefore, FIFA decided that the Russian team will be eliminated from the competition. Poland are now playing the final for sure.

All or nothing: After a disappointing 4th place in the World Cup Qualifiers behind Denmark, Scotland and Israel, Fodas’s eleven are under pressure. The players in red-white-red have to win in Cardiff. But also the hosts around Gareth Bale want to participate in a World Cup again for the first time since 1958. After a long break since the last international matches, there are questions about the current performance. The ÖFB squad is led by David Alaba. The Real Madrid player had to come to terms with some harsh criticism after the “Clásico”. Also Arnautovic and Kalajdzic are supposed to deliver goals in the offence. In general, Franko Foda can rely on international players. We can expect them to be ready for action and eager to fight for the ticket. Also Wales have proven morale time and again. Even when superstar Gareth Bale is put on the back burner at his club Real Madrid, he shows a different face in the jersey of the “Dragons“. And especially in their home stadium, Rob Page’s team shouldn’t be underestimated.

All bets on the match!

The 2016 European champions lost the “final” for the direct ticket to the World Cup at home against Serbia 1:2 and therefore have to play the playoffs. Their first match is the semi-final against Turkey. On paper, the favourites are clear. However, Stefan Kuntz’ team shouldn’t be underestimated. At home, the team from the Bosporus defeated the Netherlands, amongst others, in the qualifiers. The centre of play is Inter player Hakan Calhanoglu. However, he alone can only do so much against the full power of the Portuguese. Cristiano Ronaldo is a fixture in the team of the hosts. Further, Atlético Madrid offence player João Félix is in top shape. It will be hard to take the victory out of the hands of Fernando Santos’ team. But still, the duel shouldn’t be taken lightly.

All bets on the match!
Play responsibly!